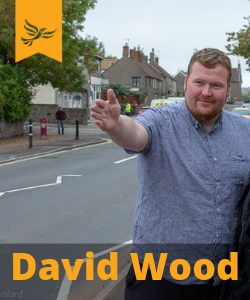 David lives in Temple Cloud with his wife and son, who will attend Cameley Primary next year. David has various concerns regarding the current Bath and North East Somerset Council -- they are building the wrong kind of houses in the wrong places. Instead, if elected, Dave would build houses where the communities both want and need them.

In addition, David is concerned about the failure of investment into roads, and the poor impact it has on the safety of our villages. Mendip is also suffering from air pollution problems, which are among the worst in the South West.

David is the face of change, as well as an active member of the community, as he set up the Temple Cloud Community facebook page, serves as a volunteer for a number of community events and groups, helps to sort out litter and fly tipping, and puts out his monthly FOCUS newsletter to the residents of Temple Cloud, Hinton Blewett, and the Harptrees.

David is an experienced campaigner for change, having spent 12 years as a Councillor in another district as well as time on a parish council.  David currently works as a professional campaigner and spent 10 years working in charity sector, mostly for Citizens Advice. David is standing for election because he wants B&NES to be a council that listens to the needs of our villages.