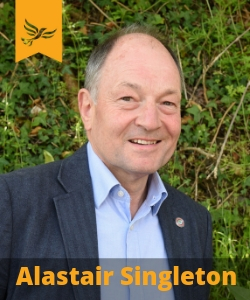 Alastair Singleton has lived in the ward for almost thirty years.  After an early career in the Police in Hong Kong and HM Diplomatic Service, he has spent many years in business locally and established and grown successful companies in the service sector.  He was elected to the South West Regional Council of the CBI, and spent fifteen years as a Magistrate in Bath.  He has widespread voluntary and charity experience and is a former Vice Chairman of Compton Dando Parish Council.  He is married with three children and a dog, is a committed European and his passions include social justice, the environment and Fairtrade. 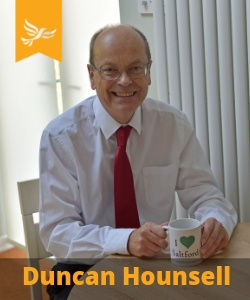 Duncan Hounsell has been a resident of Saltford for over thirty years. Duncan has been a strong voice on numerous issues at the Bath and North East Somerset Council Cabinet and Committee Meetings, such as discussing the reopening of Saltford station, funding for the Saltford Brass Mill project, and demanding fair funding for Dial-A-Ride. Previously, Duncan has been the chair of Saltford Parish Council, as well as a spokesperson for the independent Saltford Station Campaign. On numerous occasions, Duncan has also given local television and radio interviews in regard to issues in Saltford. In the past, Duncan was a founder of Saltford Stars Junior Football Club, and has served as a governor of Wellsway School. He has had a lengthy career as both an assistant head-teacher, and Head of Mathematics in various local comprehensive schools.